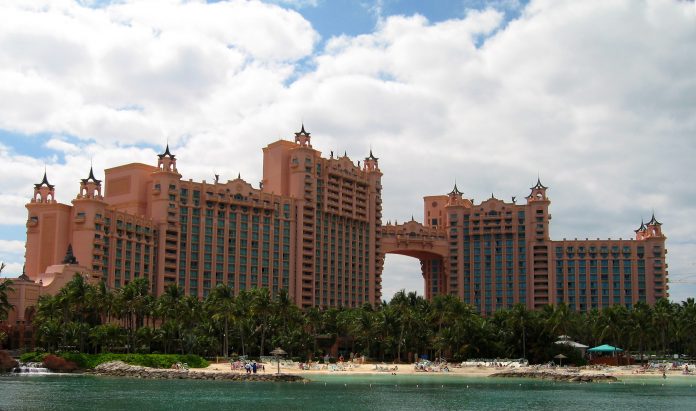 The hotel’s appeal is such that it has already produced an even more extravagant clone in Dubai (Atlantis The Palm) — and two more are on the way: Atlantis Sanya in China and The Royal Atlantis Resort in Dubai.

It’s a hotel that could be in Las Vegas — but not even Las Vegas could recreate a real sea.

The resort is on Paradise Island, 40 minutes from Nassau International Airport. A cab ride costs about $30.

The island is connected to downtown Nassau by a bridge. The harbor is also very close.

The resort occupies a huge area. In the beginning it is common to get lost or cross paths with other guests always looking at the island map. As the complex consists of five different hotels, the bars, restaurants, stores, pools, and information points are spread throughout the property, the main building of which is the Royal Towers. A shuttle service is offered 24 hours a day connecting all the buildings in the resort.

The complex maintains five different hotels (not to mention those operating in the time sharing system): the economical Beach Tower and Coral Towers, the traditional Royal Towers, and the brand new and luxurious The Reef and The Cove (the latter, the most elegant of them all). Besides the pools, the resort also offers a gym, tennis court, climbing wall, golf course, and spa.

The photos are of the Ocean Suite I stayed in at The Cove. The room is large, with great sound protection and the balcony provides a beautiful view of the ocean and the water park.

Living room with coffee maker and mini-fridge, walk-in closet, and a huge bathroom further expand the feeling of space.

As with other mega-resorts, the pools end up attracting more attention than the beaches themselves. Atlantis has 11 pools and a water park with seven super-plays.

Each pool has its own bar/kiosk.

The highlights are the Cascades Pool, exclusive to guests of The Reef and The Cove, a daily meeting point for those traveling with the little ones, and the Cain at The Cove, the private pool for older guests of The Cove. Every day a DJ prepares a special setlist for pop music lovers and 20 cabanas surround the pool area for those looking for more restful and quiet moments.

Want a tip? If you’re looking for a quiet pool, head to Dolphin Cay – the dolphinarium area – nearby is an Olympic size pool that hardly anyone uses.

It is the Atlantis water park. This is the main meeting place for kids. This is where some of the resort’s most famous attractions are located, such as the replica of The Mayan Temple with its huge waterslide through the shark tank; the “bumpy river” where you ride most of Aquaventure while sitting on a giant float; the Power Tower, another giant waterslide that falls in the dark and ends in the river.

Sea Squirts – the program shows children how the marine life at Atlantis works behind the scenes. Not only do they get to see the sea creatures’ hospital, but they also get to feed baby sharks and small stingrays.

Ultimate trainer for a Day – a day as a trainer at the park. This is a different experience for those who want to learn more about the behind-the-scenes work and care of the marine animals. It is also an opportunity to feed dolphins, rays and sea lions.

Shallow Water Interaction and Deep Water Swim – interaction with dolphins and sea lions is among the main attractions at Atlantis. You can interact in the shallow water (shallow water interaction) or swim with the animals in a deeper part (deep water swim).

All these activities have additional costs and must be booked with your hotel concierge.

The beaches in front of the resort have rougher waters and their safety areas are well marked. The sun loungers are usually less crowded than those at the pools. The service from the kiosks expands to the beach chairs, and early every day, the hotel staff sweeps the seaweed from the sands. Cove Beach and Paradise Beach are the best for those who want to relax while listening to the sound of the sea.

Although jet-skiing is not recommended by the hotel, some people from Nassau stay at Atlantis Beach West offering this type of ride.

There is no shortage of options: 21 restaurants and 19 bars and lounges ranging from casual dining to award-winning American chefs such as Japanese-Japanese Nobu and chef Bobby Flay’s meat-eating MEAT. All a la carte restaurants require reservations, either for lunch or dinner.

It is worth paying attention to a few details:

As the public is mostly North American, the dishes are generous and follow the Yankee taste. Familiar names such as Carmine’s, Ben & Jerry’s and Starbucks are also present at the resort.

As the hotel does not operate an all-inclusive system, all meals are charged for, from breakfast to snacks at the pool bar. Breakfast, served at The Cove’s Moisac restaurant, costs $35 per person. For the finer restaurants, consider around $100 per person for a full dinner, plus tip.

Atlantis also offers a dining plan system that is modeled after the same Disney program.

Three types of dining plans are offered (Value, Atlantis and Reef and Cove) with set menus and values. This package includes breakfast and dinner, but tipping is not included. When traveling as a family, children up to 6 years old do not pay for the dining plan, and between 7 and 11 years old get a discounted price when buying their parents’ package. Please note: It is important to request the dining plan at the time of booking or even three days before your arrival, as it is not possible to make this purchase upon arrival at the hotel.

Here it is worth following the tip that applies to every resort in the Caribbean: check the brands available and always ask for the name, otherwise you may receive something “generic”.

The casino is huge and has been revitalized over the past few years — very reminiscent of Las Vegas casinos. Nearby you will find new restaurants such as Nobu and Olives, the entrance to Aura, the hotel’s nightclub, and the big screen room for those who want to watch and place bets on different sports. The complex also has a mini cinema and a space for stand-up comedy shows.

Cordial and helpful, all employees are always ready to answer questions and provide guests with any kind of information.

Quite popular with those traveling with children, the public is essentially American, with some British, but Brazilians and Latinos in general are already more present since the expansion of Copa Airlines routes.

All hotel charges are billed in dollars, so don’t worry about using local currency.

Brazilians do not need any kind of visa to travel to the Bahamas, but do not forget: traveling with a connection in the United States, you will necessarily need to present a valid American visa.

Officially you do, but at no time – not at check-in in Brazil, nor during the connection in the USA, nor at immigration in Nassau – was I asked for my international vaccination card.

How to get there

If your destination is just the Bahamas, the best option is to try to go via Panama with Copa Airlines to avoid immigration and customs in the United States. Copa flies four times a week between Panama and Nassau. Via the US, the route through Miami will be shorter, and the Miami + Bahamas combination is a great round trip.

Atlantis offers a transfer from the airport to the hotel, just ask at the time of booking. At the airport you can also choose to take a cab to the resort.

High season: March, April and from June to mid August. Low season is from January through early February, May, September through early December.