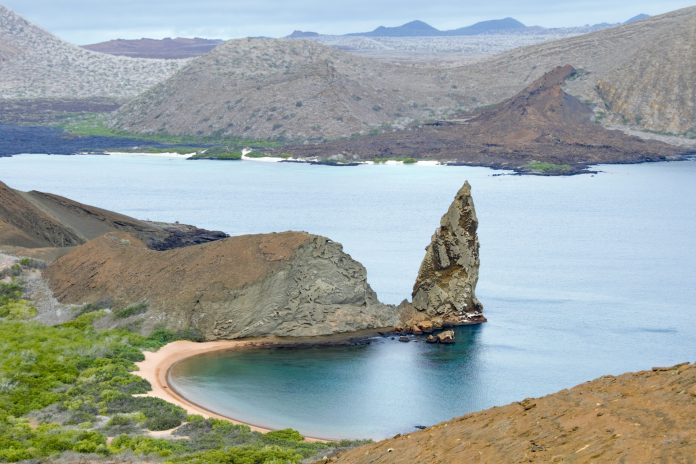 The Galapagos Islands, whose official name is Archipelago of Colon, are located in the Pacific Ocean about a thousand kilometers off the coast of South America and are part of the territory of Ecuador, being administratively one of the 24 provinces of the country (Province of Galapagos).

The archipelago comprising the Galapagos Islands as a whole, which are of volcanic origin, is made up of dozens of islands and rocks, with thirteen larger islands (between 14 and 4 588 km²), six smaller islands, and dozens of islets and rocks, which total a land area of 8 010 km². The archipelago is distributed over an oceanic area of 59 500 km², adding 140 555 km² of territorial sea to the Equator.

It has a high biodiversity and is home to a peculiar fauna, which includes many endemic species such as the Galapagos tortoises. The entire islands constitute a wildlife reserve, administered by the government of Ecuador and which has been, since Charles Darwin’s visit, the world’s leading living laboratory of biology.

The islands first appeared on two 16th century maps, one drawn by Mercator (1569) and the other by Abraham Ortelius (1570). They were called “Islands of the Turtles” (Insulae de los Galopegos).

In his four years of isolation on Juan Fernandez Island off the coast of Chile, Alexander Selkirk (the prototype of Robinson Crusoe), visited the Galapagos Islands around 1709 with Captain Woodes Rogers.

The first resident of the Galapagos was an Irishman named Patrick Watkins, marooned there in 1807. He spent two years planting vegetables and traded them for rum with visitors. In 1809, he stole a boat and fled to Guayaquil.

Galapagos was officially annexed to Ecuador in 1832 and was named “Archipiélago del Ecuador”. However, its official name is Archipelago de Colón.

The Galapagos archipelago is a collection of 58 islands about 965 kilometers (497 miles) off the country’s mainland coast.

Its most famous visitor was the young Charles Robert Darwin, who traveled on his ship “H.M.S. Beagle” owned by Captain Robert Fitz Roy on September 15, 1835, staying until October 20.

Darwin visited only 4 islands, first San Cristobal (Chatham Island), then Floreana (Charles Island), Isabela and Santiago, during the 35 days he stayed in these lands, he made large collections of plants and animals, as well as observations of life.

How and when to go to the Galapagos Islands?

To get to the Galapagos Islands, there is only one possible way: by plane, however there are only 2 airlines that fly to the islands: AeroGal and TAME. Thus, the differences in values between the companies are small, due to the lack of competition, making the value either very high, or normal, or very low.

Regarding the recommended period to go to the islands: there is no certain time, because any period you can visit the islands, but the trip to the islands will vary according to the taste of who is traveling:

If so, follow along with us the list of 2 places you must not miss when you go to Galapagos, and at the end of the topic, we will tell you the recommended time to stay in Galapagos, having in mind the time necessary to enjoy everything without haste, having the maximum possible benefit!

Basically, 2 places you simply cannot miss if you travel to the Galapagos are:

It consists of an area of conservation and preservation of the fauna and flora of the islands.

On Santa Cruz Island is the Charles Darwin Science Station, which is a place with many turtles, which are studied and observed by scholars.

There is also Academy Bay, a place where several sea lions stay.

Thus, in view of the 2 places that were presented, the average time to stay in Galapagos and enjoy all of them, without haste, and in a free way, visiting all the places, is approximately 10 days.

Wild animals of the Galapagos Islands

There are several wild animals of the islands, but we will show you the main ones:

Being the largest bird in the archipelago, they have blue legs, and do a mating dance (which is very cute, by the way!) to attract the female, and in the dance the male circles around the female and makes noises with his beak, which is big and yellow!

Being a bird with a blue beak and red legs, it likes flying fish that it can catch thanks to its high speed. But make no mistake: although it is the least seen, it is the most numerous on the islands!

When you go somewhere, you should not only enjoy the landscapes, or food, or something else, but everything as a whole. And it was with this in mind that we decided to include some of the fauna that you should enjoy if you go to the Galapagos.
In fauna, the animal that stands out the most is the turtle. In this case, the giant tortoise. And that is exactly what we are going to talk about: the giant tortoises that exist in Galapagos!

Being the main focus of attention of scholars, giant tortoises are the result of a long evolutionary process of adaptation to the environment. They can weigh up to 400 kg, have a length of about 1.8 m, and have a very long life span, up to 170 years old.

And did you know that these turtles are very greedy? Even though they are herbivorous, i.e. they only eat cactus, grasses, leaves, fruits, and the like, they need to consume 32 to 36 kg of food daily, which despite such a quantity, is not so beneficial, because the slow digestive system of these turtles makes the absorption of nutrients from food slow and inefficient.
Today, so that these turtles can continue to exist, there are several conservation projects, as well as attempts to scare off hunters.

Charles Darwin and the theory of the evolution of species

Charles Darwin, was the creator of the Theory of the Evolution of Species: an important theory that is taught to this day. Guess where he formulated this theory?

That’s right, in the Galapagos Islands, when he visited in 1835 and noticed the unique characteristics of the fauna there, which contributed to his formulation of the Theory of Evolution of the Species! Can you believe it?

The Galapagos Islands can be enjoyed very well if the trip takes place under certain circumstances mentioned above.

Be willing to stay about 10 days to enjoy the islands calmly and properly, and to visit the sights that we mentioned above!
That’s it! Now, after following these steps, you will have a good trip, being able to relax and forget all about stress!
Have a good trip! We hope we have helped you.