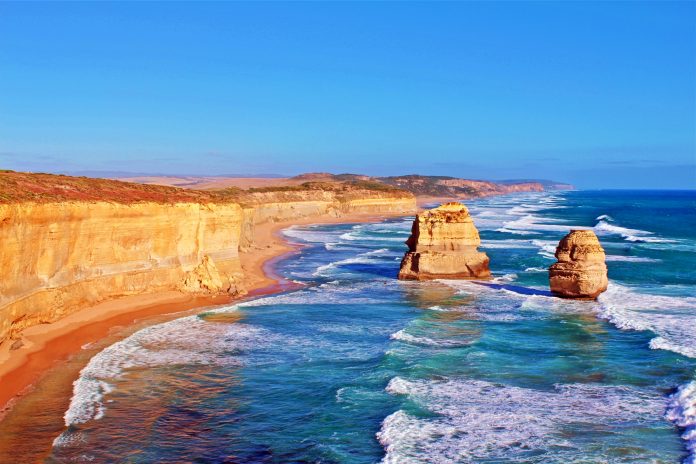 Of the tours I took during my time working in Australia, one of the most spectacular was a day tour on the so-called Great Ocean Road, or Great Ocean Road. One of Australia’s postcards is there: the known Twelve Apostles rock ensemble. I had seen pictures of this landscape a million times before, and honestly, it had never impressed me. That landscape, in my imagination of so many spectacular coastlines in the world, looked overrated.

Well it is not. This landscape is one of those places that you can only see live for us to understand the grandeur of the thing, its beauty. Photographs can’t even pinpoint how beautiful this whole coast is. In the part where the Twelve Apostles are located, there are numerous stops, each with a more spectacular view than the other – and then we want to give Google Images a little ear tug because it almost always shows the same angle of the landscape, when in reality there are an infinity of more beautiful ones.

Great Ocean Road Day Tour: Is It Worth It?

To visit the Great Ocean Road, the ideal is to take it easy. Mainly, staying at least one night somewhere along the road, in one of the charming coastal towns. The stretch seems short, from Torquay to Warrnambool. But the landscape is so beautiful, and there are so many spots for you to enjoy and have a picnic, that it’s really a sadness to run.

However, our group only had one day off. So we decided to make the day trip there. After all, better to see a little than not to see at all. The day tour is therefore worth it. But it’s run.

Our minibus tour left Melbourne early Saturday morning. It takes about 2hrs to reach the first stop on the road, in Bells Beach. Bells is one of the beaches on the world surfing circuit, and in winter there the water gets to unbelievably cold temperatures – all surfers need to tackle the waves in at least 7mm neoprene. Amazingly, that icy water doesn’t scare these guys: hundreds were enjoying the swell of the day in the water.

From Bells to Point Addis Marine Park, a point on the coast with a view from the top of several small beaches and inlets. But more importantly, a spectacular temperate coral reef. There, you can dive, for example, with the leafy sea dragon (leafy sea dragon, in English; Phycodurus eques), a species of the same family as the sea horse, Syngnathidae. This species by the way only exists on the south and east coast of Australia. I wrote this information down in a special corner of my head. After all, I want to go back to diving there. But in summer, with a little warmer water.

The journey continues through several beaches, each one prettier than the other. For some reason, that coastal landscape reminded me of California’s Big Sur. Which is a hell of a compliment, by the way, let’s face it. Which also made me think that this road, in summer, must be much more interesting than in winter, when I went. The curves are many, anyway. But nothing that someone who has already ventured into Hana (Maui) can’t calmly face…

Our guide was a hippie-surfer, and at every bend in the road where a good wave broke, he slowed the bus down so we could follow the swell spectacle – sometimes a surfer would slip on the wall of water. I’m used to watching surfing in Hawaii, I enjoyed these moments of slow down from the guide a lot. Although my bus mates didn’t seem to understand or enjoy it that much. So the buddy guide was soon pruned. Oh well.

At one of the roadside stops near the Kennet River, however, the cute surprise of the day: several koalas (Phascolarctos cinereus) in their eucalyptus (or other) trees, resting! In fact, the koala sleeps an average of 16 hours a day, so you’re likely to see it sleeping. In the few hours of the day when you are awake, you will invariably be eating. Koala life is like a vacation at home: it eats and sleeps non-stop.

In this same place, in addition to the koalas, we saw a series of king parrots from Australia (Australian king parrot, in English; Alisterus scapularis), super red and very excited with the opportunity for food in hand. (I don’t particularly enjoy feeding animals, but several people in our group did it to take that cheesy photo with the parrot on their arm.)

The lunch stop for this tour is in Apolo Bay. The lunch itself was nothing special, but the dessert… we went for ice cream at Dooley’s Ice Cream, a shop with several flavors awarded nationally. I had a chestnut ice cream with tiramisu that really won on my personal ranking. A few brave ones in our group have ventured out with vegemite ice cream, that dark yeast paste that Australians love with passion – no thanks, I’ll pass.

After lunch, a quick stop for a walk in the rainforest of ferns and eucalyptus trees in Great Otway National Park. The well-marked trail made it a lot easier, despite the mud (it had rained the day before).

On the Great Ocean Road – The Twelve Apostles

After the digestive walk, it’s time to discover the most beautiful and most famous stretch of the Great Ocean Road, the Shipwreck Coast in Port Campbell National Park where the Twelve Apostles are located.

Absolutely nothing prepares you for this coast, which has already entered my personal list of the top 5 coasts in the world. The different shades of yellow in the limestone are already unbelievable. But with the sunlight that came out from time to time, everything is of an even more indescribable clarity and beauty. The cloudy day didn’t manage to diminish the beauty of this coast, whose yellow is simply impressive.

The super-violent sea, entering the small and large beaches, the many shipwrecks, the sedimentary rocks so well “aligned” in its 6000 years of existence, the holes and arches formed by erosion, the deafening noise of the waves breaking violently in each cliff, in every stone corner… Everything there looms large and transforms the landscape at every second, at every glance.

We did two short trails on the Great Oacean Road, the Loch Ard Gorge and the Gibson Steps. Loch Ard Gorge leads to one of the beaches “hidden” by the terrain, and is characterized by several “fingers” of sedimentary terrain advancing into the sea.

Ahead, Island Arch and Mutton Bird Island, where a piece of wreck stands out on calmer days. The complete trail is about 4.2 km and can be done with ease in 1 hour and a half, stopping to photograph and everything else. All the views are spectacular, and to say it’s worth it is understated: you shouldn’t leave the Great Ocean Road without making it complete.

Between one trail and another, I, who love an aerial view, didn’t think twice when the opportunity arose. I went on the helicopter tour offered by 12 Apostles Helicopters. The company is very professional and relaxed, as well as good helicopters. I just thought the travel time was short…

My course friends and I went at the last time of the day. With that, we had the privilege of seeing the coast in even more golden tones, almost at dusk. Look, I can’t even explain how exciting it was!

After a quick stop on the Twelve Apostles trail that is in front of the park’s information center, this stop just to photograph the Twelve Apostles in full from their best-known point of view – the cliche photo that appears by Google Images -, we went do the second track, the Gibson Steps. Which was also small, basically an 86-step limestone staircase that ends at a beach facing the Twelve Apostles. And it was from there that we saw the most beautiful sunset that the state of Victoria could present to us. <3

This overdose of yellow limestone terrain with rough seas (which I love to see) and such unique natural beauties left me a little dizzy. Above all, with a very light head. What was essential to face the 3 hours back to Melbourne, at night. When I woke up from my nap, we were finally crossing the Yarra River into the city. After an intense day of incredible views along the Great Ocean Road, the smile from corner to corner was hard to leave.

Lake Titicaca: 6 fun facts about the Peruvian side