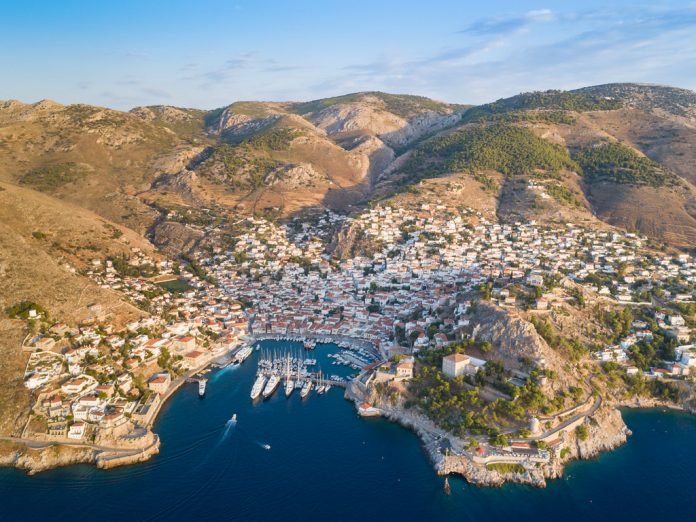 Before planning a trip to Greece, we need to understand its regions as they offer us countless possibilities for itineraries. Once we know how the country works, it’s easier to choose what to visit, which Greek islands are most interesting to you, and how to combine with each other.

Dividing the country and the Greek islands

There are several formal and administrative divisions in the country. But, as our goal is to make life easier for the reader, we’re going straight to the point by presenting 4 practical divisions that concentrate most of the destinations we dream of: “Greece Mainland”, “Cyclades Islands”, “Ionian Islands” and “Crete”. In addition to these, there is the archipelago of Espórades, Dodecanese and a few others.

On the Continent are famous destinations such as Athens, Thessalonica and the Peloponnese region. If you plan to visit the Greek islands, you will most likely visit Athens, especially if your flight leaves Brazil. And I highly recommend going there, after all, you don’t often have the opportunity to see temples over 2000 years old, and a lot of history and culture in one place.

The Cycladic Islands are those that inhabit the imagination of anyone who thinks of Greek islands. Blue and white houses, octopuses drying on the ropes and churches with blue domes. It is on the Cycladic islands that the two most famous islands in Greece are located: Mykonos and Santorini, and some other jewels little explored by Brazilians such as Milos, Folegandros, Ios and Naxos.

The Ionian Islands started to become more famous among us because of one beach in particular: Navagio Beach, that wonderful one with the abandoned ship in the sand and an animal view. Navagio is located on Zakynthos, one of the four main and largest Ionian islands. Besides Zakynthos, Kefalonia, Corfu and Lefkada complete the team. They all have amazing beaches, but don’t expect to find white houses around here. The look is different, much greener than the Cycladic islands and with an architecture that resembles Italy more than Greece, due to the strong presence of Italians in this region.

Finally, Crete, the largest island in Greece, which is why it calls a region of its own. Crete determines the south of the Aegean Sea and, in addition to the beautiful beaches, it has a lot of history, like the myth of Minotaur. It has attractions for a whole week, but can be visited alongside another Cycladic island in four or five days.

How to choose which islands to visit in each region?

The ideal would be to choose a group of islands: either Ionian or Cycladic. That’s because moving between some Ionian island to a Cycladic island (or vice versa) is complicated and in 99% of cases it will pass through Athens in a plane exchange.

But I won’t say it’s impossible. The idea is not to limit you, but to inform you of the existing options. I did Cyclades (Santorini, Milos and Mykonos) + Jônicas (Zakynthos) myself in the same trip through Greece and it worked well. Relax and I’ll tell you how later. First, let’s talk about the destination options within each island group.

PS- We won’t mention it anymore, but don’t forget Crete. It’s a very beautiful island, big and that combines very well in a trip with the Cycladic islands.

Santorini is without a doubt the most famous of the Greek islands. The iconic architecture with the small white houses cascading on top of the mountain is the postcard of the city, along with the blue-roofed churches. It is an almost unanimous choice among tourists visiting the Greek islands.

Mykonos is an island with super beautiful beaches, but its focus is on hustle and bustle. Here there is more structure to go to the beach, there are chic (and expensive) beach clubs, several restaurants and a cute little center.

Milos became my darling island in Greece, for having beaches with a totally different look from the ones we are used to. One that resembles the surface of the moon (Sarakiniko), another in which access is via a rope and a ladder (Tsigrado), and a super narrow one with walls that form a path that leads to the high seas (Papafragas).

Folegrandos is tiny and therefore super easy to combine with another neighboring island, as it doesn’t need many days.

Ios is also a party island. But, unlike Mykonos, the audience is much younger (around 18, 19, 20 years old) and the island is cheaper.

Naxos and Paros are two islands close together and halfway between Santorini and Mykonos. They can also be options for those who have more time in the country and don’t want to spend as much as on the most famous islands.

Zakynthos is the island that houses one of the most beautiful and most famous beach in the world, Navagio beach. In addition to Navagio, Zakynthos has numerous other attractions, such as turtle island where you can see the little animal swimming close to you.

Corfu, in addition to beautiful beaches, has a lot of history in its villages. Corfu’s old town is a UNESCO World Heritage Site. Another feature of the island is that it is one of the greenest in Greece.

Lefkada is like Zakynthos the island of beautiful beaches with breathtaking blue tones. Another advantage of the Ionian Islands is that the prices are not as absurd as the prices found on the famous Cycladic Islands during the high season.

Kefalonia is the largest of the Ionian islands, so there is plenty to do and plenty of beaches to visit. Close to Kefalonia and easy to visit by boat is the island of Ithaca. “If you ever leave for Ithaca, hope that the road will be long, full of adventures, full of knowledge…”. Yeah, any corner you visit in Greece has some story, poem, personality or myth associated with it.

Other islands outside the Cyclades and Ionian

Skópelos is the island that served as the setting for the movie Mamma Mia. It is located in the Sporades, a group of islands close to each other and north of Athens.

Rhodes, Dodecanese island that doesn’t live only by the beach, but with a lot of history since it was there that the famous Colossus of Rhodes was located (Game of Thrones fans, does the statue resemble any city in Essos? =P).

How to get around the Greek islands?

–Ferry is the most common and practical way to move between islands of the same group, especially in the Cyclades. There is a ferry to most islands and the boat is big (it has comfortable seats, a snack bar, and even a shop), it moves very little and you have more space to circulate and stretch your legs, and it is generally punctual.

By ferry I did Milos-Santorini and then Santorini-Mykonos. I bought everything online through Hellenic Seaways one month before traveling, and had to pick up the ticket up to one hour before boarding at the place indicated in the purchase confirmation email. However, from Athens my indication is not the ferry, but the next option.

–Airplane from Athens or between the most famous islands. As I said at the beginning of this post, your arrival in Greece will most likely be in Athens, unless you come from elsewhere in Europe and find a direct flight to the island you are going to (there are some flights from the islands directly to cities from other European countries, like my flight that went direct from Zakynthos to Dusseldorf by Eurowings).

Taking a ferry from Athens to Santorini or Mykonos, for example, can be super tiring as the journey is long (from 5 to 8 hours) and often not financially rewarding, as flight prices are much lower than that those on the ferry (for example, I paid only 25 euros on Ryanair’s Mykonos-Athens flight, while the ferry was in the 60 euros range!).

In addition to Ryanair, smaller Greek companies fly Athens to Greek islands. From Athens to Milos I went by Olympic Air which operates together with Aegean Air, and from Athens to Zakynthos I went by Sky Express.

And how to go from Cyclades to Ionian?

1-You can search for specific flights and try to fit them into your travel schedule, like the flight from Mykonos to Corfu.

2-Or you can take two short flights, but with hold and connection in Athens. For example: Mykonos- Athens, wait 2 hours and then Athens- Zakynthos, which is what a friend did.

3-Or you can do what I did. Take the last flight from any of the Cyclades to Athens, book any simple hotel near the airport and then take the next day’s first flight to Zakynthos. I left Mykonos at 9:20 pm, arrived in Athens at 10:10 pm and the next day I left for Zakynthos at 9:00 am and arrived at 9:50 am.